The Urban Rangers are a Boy Scout-style organization introduced in "Oath to an Ed" consisting of Rolf, Jimmy, Jonny 2x4, and Plank. They earn badges and medallions for different tasks completed which are usually just normal, everyday tasks. They appear to often take camping trips to the woods as a chance to earn certain camping badges seen in "An Ed in the Bush."

The Eds once attempted to join the Urban Rangers in hopes of earning a copy of their uniform, however, they were dishonorably discharged because they could not earn a single badge (largely, in part, due to Ed and Eddy). Now, because of that, Eddy has a severe grudge against them and often tries to prove that the Urban Rangers (or "Urban Losers" as he calls them) are a bunch of "phonies" in a way to exact revenge on them. His attempts to downplay the rangers fail and leave him in disgrace. The "Wee Roach" seems to be the lowest rank in the Urban Rangers, as new members start out as Wee Roaches.

It's revealed in "The Good, The Bad and The Ed" that the Urban Rangers have existed for sometime over fifty years. People who are not Urban Rangers can be temporarily sworn into the organization through the Urban Ranger Handbook, as seen in "Ed Overboard."

The Urban Rangers Train is only seen in the episode "The Good, The Bad and The Ed." It is used in the last test to earn the Hairy Chest of Resilience badge. It was seen on the train track that runs though the Mountain Range. The train appears to be a generic steam locomotive with the Urban Ranger's insignia on the front of it which is a hand making an L shape.

The Urban Ranger uniform consists of mostly yellow and blue. They have a red neckerchief and a hat that seems to be a blue rag.

The Urban Rangers have had seven appearances in the show. 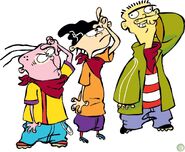 Ed and Eddy mess up somehow as usual.

The picture of the "Freeing the Fool" pewter medallion.

Jonny and Jimmy looking in the old Handbook.