Peach Creek Jr. High is the only school shown in Peach Creek. All the kids who live in Peach Creek are enrolled in the school, as it's shown to be a joint school between the junior high school and the elementary school.

Peach Creek Jr. High is a typical school, complete with lockers, a cafeteria, classrooms, a library, bathrooms, a gym and a football field. It also features a boiler room (where the Kankers go to skip school; what happened to the janitor is unknown), a newsroom (where the infamous Bobby Blabby created ludicrous tabloid lies about most of the kids) and a nurse's office (where Edd is the nurse's assistant). The school, however, lacks a swimming pool, so the school must transport students to and from the Peach Creek Community Pool for things like swimming lessons. The school's located at an intersection at the end of the main street of town as seen in Ed, Edd n Eddy's Big Picture Show.

There are only 19 episodes, 2 specials and a movie that feature Peach Creek Jr. High, and few have it for the whole episode (such include "Truth or Ed" and "Too Smart for His Own Ed").

The usual cast of kids is all that are usually seen, but the school seems to be too large to just be made for the usual kids. They all appear to be in sixth grade (except Jimmy and Sarah) according to their report cards as seen in "Mission Ed-Possible." Medical records and classroom rosters with other students' names are to be found, as well as a surplus of lockers. You also see open books in the library and unfinished lunch trays in the cafeteria, implying that there are other kids at the school. We also hear other students in "Cool Hand Ed," hear an unidentified locker close in Ed, Edd n Eddy's Hanky Panky Hullabaloo and see a silhouetted group of Peach Creek students in "Tight End Ed."

Even with all these unseen students going to the school, the entire football team and its cheer squad are made up of the usual cast. In addition, the basketball team is apparently composed of Kevin, Rolf, and Jonny; while there might be others, it seems plausible that they make up the entire basketball team. This isn't a good thing either since when it comes to football, only Kevin seems to be any good at the game. Ed was probably good given his strength but he was promoted to school mascot. Most of the boys at school are on the Peach Creek Cobblers football team. Jimmy and Sarah appear to be in the lower elementary part of the school. In "All Eds Are Off" Jimmy appears to have a cubby more than a locker when he asks Jonny to do his math homework. Also in "Cool Hand Ed" Jimmy and Sarah appear to be in an arts and crafts with kid posters on the walls, so it's shown to be a joint school between the junior high and elementary schools.

Other students enrolled at Peach Creek Jr. High, who are listed on the roster but not actually seen.

The menu is mostly seen in "All Eds Are Off" and Ed, Edd n Eddy's Hanky Panky Hullabaloo.

Note: These damages are usually caused by Ed and/or Eddy.

In "Cool Hand Ed," Jonny and the Eds look out at the Cul-De-Sac from the top of the school. However, this should not be possible. When looking at a map of the Cul-De-Sac, the school is located to the south of it, not the north. As seen on the map, and during nighttime in "An Ed in the Bush," The Factory is located in the spot that the school was in, as it usually is.

This map however might be misleading and made by a fan since the earlier and only official version of the map featured no signs.

The silhouettes of other students at Peach Creek Jr. High.

The room used to print the school newspaper.

Another view of the Woodshop classroom.

The "Cubby Hole" section of the hallways.

Another view of the cafeteria.

A view of Botany Class

The Library, as seen in Cool Hand Ed. 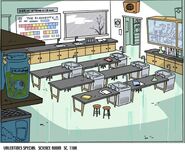 The door to the boiler room.

Overhead view of the boiler room.

Another view of the boiler room.

The school as seen in Ed, Edd n Eddy - The Mis-Edventures.

The school in winter.

The lost and found. 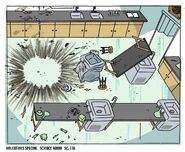 The destruction in Science Class.

Eddy's Locker with the Kiss the Hunk booth.

The gym during Booster Shot Day. 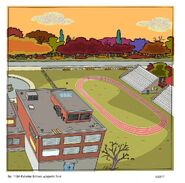 The school building and the sports field.

Entrance to the library.

The marvelous view of Peach Creek from the top of the school.

School signs "Autumn Book Fair" and "Don't Doodle. Use Your Noodle!"
Add a photo to this gallery
Retrieved from "https://ed.fandom.com/wiki/Peach_Creek_Jr._High?oldid=235737"
Community content is available under CC-BY-SA unless otherwise noted.

Fandom may earn an affiliate commission on sales made from links on this page.

Fandom may earn an affiliate commission on sales made from links on this page.