"Nagged to Ed"
Park n' Flush (mostly referred to as The Trailer Park) is the home to the Kanker Sisters. The trailer park itself is in a 1960's era style and is located behind the constructed Cul-de-Sac, which also borders between the creek and the woods. On several occasions, the trailer park is involved; some of them include Ed's rescue and when Eddy was trying to snapshot the Kankers. Overall, the trailer park is the least visited area in Peach Creek. Eddy would describe it as "a postcard he sent to his brother". Due to the Kanker Sisters living there, most of the Peach Creek kids stay clear of this area, especially the Eds. There is a manhole leading to an underground tunnel of the creek (possibly a part of the sewer) in the park. The Trailer Park is abundant in mobile homes, dog kennels, wrecked cars, vehicle components, furniture, household appliances, clothes lines, yard objects and junk. It is unknown what will happen to the Trailer Park once the houses on the new Cul-De-Sac are built. The Kankers attend school, so the Park n' Flush could be relatively long term, but it is heavily implied that the Kankers simply can't afford anything better than the trailer park. There is a suitcase from Eddy's brother that could be found under the Kanker Sisters' trailer, a map holds the location & is hidden in a house of the cul-de-sac.

The trailer park as seen in the Big Picture Show. 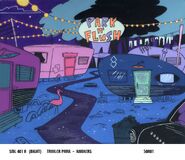 The trailer park at night.
Community content is available under CC-BY-SA unless otherwise noted.
Advertisement