One Size Fits All

"One Size Fits Ed" is the 5th episode of Season 4 and the 82nd episode of Ed, Edd n Eddy. In this episode, Jimmy wishes that he was a superstar. Eddy tries to make Jimmy's wish come true by turning him into a sumo wrestler. Once he successfully does so, Eddy must now find a way to get Jimmy to Japan since sumo wrestlers are revered only in Japanese culture.

Sarah and Jimmy are having fun in the cul-de-sac when they find a wishing well in the middle of Rethink Avenue. Not wanting to miss out on a wish, they both take out quarters and flip them into the drink, with Jimmy wishing for fame and fortune before he and Sarah run off. As soon as they're gone, Edd climbs out of the well with a cardboard mock-up of the well's walls on his head and grabs the quarters, along the way explaining to Eddy that the optical illusion was due to geometrical drafting and that "the brain can be fooled by what the eye perceives."

Of course, Eddy isn't taking notes on this, much to Edd's dismay. Before Edd can complain too much about this, though, Ed exits his house wearing only his underwear and his jacket tied about his waist, along the way shouting pidgen Japanese. He comes up to his friends and asks them to guess what he is. After Eddy guesses that Ed's an idiot, Ed says he's already tried it, and instead he's become a sumo wrestler. Eddy is struck with a new idea for a scam, and suggests to Ed that he sumo wrestle as part of it, but Ed declines the offer. Amused, Edd jokingly suggests that Jimmy's wish would be easy to grant, but Eddy takes this idea seriously and heads off to find Jimmy.

Jimmy, meanwhile, is playing with his dolls and stuffed animals, pretending to be a star. His posturing drives Sarah away, however, and before Jimmy has time to consider his actions, Ed and Eddy arrive and shove Jimmy into a diaper and hand him eating implements, with Eddy blowing his whistle the whole time. While Ed heads out to get the food, Edd explains to Jimmy that his friends are attempting to make him a star. Naturally, Jimmy is into this, and when Eddy instructs him to sit in a chair, eat, and watch TV, Jimmy agrees. Ed then arrives with Rolf's meat locker. When Eddy tries to get Jimmy to chow down, however, Jimmy refuses, and says he has his own stash. Although Eddy is annoyed by Jimmy's eating antics, however, he is soon cheered up when he finds that Jimmy keeps a refrigerator filled to the brim with peaches and cream.

What follows is a montage of Jimmy eating peaches and cream again and again. No matter how much he eats, however, it seems that Jimmy stays the same size. When his fridge is empty, he is still in his normal body, much to Eddy's despair. However, Jimmy's belly button suddenly pops, and he swells to a gigantic size, gratifying Eddy.

Jimmy isn't happy, however, as he instead begins to cry at the loss of his petite figure, bemoaning the fact that he looks like a sumo wrestler. However, he is soon cheered up when Ed informs him that sumo wrestlers are stars and Edd adds that within their own culture they have legions of fans. Eddy then sets up a wrestling match between the boy he dubs "Imafatso Jimbo" and "Yokozuna Ed." When Ed charges into Jimmy, Jimmy's belly button swallows him up, and Jimmy is then able to pop Ed out, sending him flying out of the ring. With the match won, Eddy has stars in his eyes and believes that he'll soon be rich, but Edd reminds him that sumo wrestlers are only stars in Japan. At this, Eddy sinks to the ground, certain that there's no way they'll get Jimmy to Asia until an idea suddenly hits him.

Eddy's idea is to simply mail Jimmy to Japan by way of stuffing him into a mailbox. Unfortunately, he's too big for the box, and it splits. To add insult to injury, Edd reveals that he had known all along that Eddy's plan never stood a chance on the grounds it is impossible to send Jimmy to Japan both because A) Jimmy's newfound obesity made it physically impossible to send him there in any way and B) It's financially impossible for them to do so as the rates alone would've cost up to $200. Hearing this, Eddy immediately gets angry at Edd for knowing this and not telling him, and ends up slingshotting him away. He is about to quit when Jimmy tells him to stick around, and Eddy once again decides to try another tactic--without Edd this time.

The plot Eddy has hatched is directly inspired by Edd's flying adventure. He has set Jimmy on one end of a bent-double streetlight that's tied down with an anvil. Ed and Eddy stuff their suitcases and get ready to fly as Ed unties the anvil. Edd comes by, and when asked if he has any encouragement to offer, he merely tells them to break a leg. When Ed loosens the anvil, Jimmy starts to be catapulted, but falls off midway through. He lands on his back, crushing Ed and Eddy beneath his immense weight.

The next day, Ed and Eddy, in bandages and a full body cast respectively, are holed up in hospital beds in Edd's room. While Ed plays with the bed and watches TV, Edd refills Eddy's box of tea. Suddenly, a noise is heard: Sarah is blowing a whistle and exerting Jimmy to pedal. Eddy realizes that, for once, he's learned something. This something is not what Edd wanted, however, as what Eddy "learned" is that they could get rich if they opened up a weight-loss clinic. To this end, Eddy leans out of the window and tries to get Jimmy's attention, and ends up falling out, landing headfirst in the grass. Seeing this, Edd notes that he learned something today, and Ed agrees, saying that he learned "that Eddy is the man with the plan". 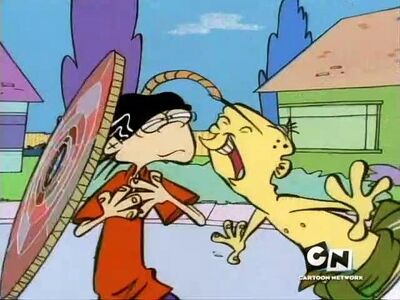 Retrieved from "https://ed.fandom.com/wiki/One_Size_Fits_Ed?oldid=239929"
Community content is available under CC-BY-SA unless otherwise noted.