Nagged to Ed
The Kankers' Trailer is a double story trailer home located in the Park n' Flush. It is a light blue color on the outside and is differently painted on the inside. It is home to the Kanker Sisters: Lee, May and Marie.

The living room consists of a couch, TV and tables, and appears to be a medium-sized room. There is also a bookshelf with blank books. The room is abundant in obstacles and junk, such as car parts and objects found on boats.

It is first seen in "Nagged to Ed" where May commands Ed to scrub the toilet. It also appears in "One + One = Ed," where Ed cuts a hole in the air and again in "O-Ed Eleven" where Marie is in the bathtub and Ed emerges from the floor. There is a stuffed reptile head on the wall, possibly that of an alligator or crocodile. Oddly, a sign on the door says "NO DUMPING."

The kitchen is first seen in "Nagged to Ed," when the Kankers were making the Eds their homemade Kanker Burgers. It was also seen in "Run for your Ed," when Lee and Marie came to see what the noise that woke them up was, and in "Mission Ed-Possible" when Ed and Eddy were chasing Edd for the report cards while the Kankers were eating their meatloaves at that time. It consists of wall cabinets, counters, a fridge, a microwave, and a stove.

The Kankers' bedroom is pink-colored with a three-sized bed to fit them. They also have a mirror with shelves, a curtain-pull closet, and dolls of the Eds. It is on the second floor at the top of the stairs, but in "Nagged to Ed," it's on the first floor.

Being in a trailer, it's no surprise that their Christmas tree is small and bare. Instead of stockings, they hang large oven mitts along the stairs. A few light strings and icicle strings are also used here. A large bunch of holly and what looks like a candle crowns their television set. Their usual tradition is the annual opening of Christmas crackers, each one containing a paper crown.

Another view of the bathroom.

"It smells under here, guys."

A part of the kitchen.

Another view of the kitchen. 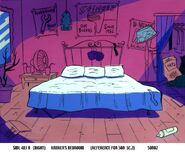 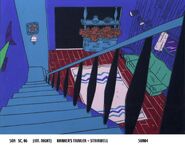 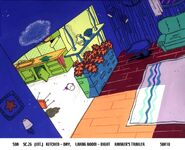 The entrance to the kitchen from the living room.
Community content is available under CC-BY-SA unless otherwise noted.
Advertisement