Not to be confused with Ed, Edd n Eddy - Jawbreakers!

Jawbreakers are the treat that every kid in the Cul-de-Sac likes and strives to get. The Eds make multiple attempts to obtain them by earning money from their various scams, only to fail most of the time. Apparently, there are hundreds of flavors of jawbreakers from around the world. Eddy appears to have a specific liking for Japanese jawbreakers, as revealed in "Once Upon an Ed." A jawbreaker costs 5¢, as revealed in "The Ed-Touchables," but in later episodes, jawbreakers cost 25¢ each, suggesting that the Candy Store raised the price for jawbreakers after the latter episode.

The main reason Ed, Edd and Eddy perform scams is because of jawbreakers, a sweet hardcandy. Considered in the show as the most delectable candy, they are sought out by all of the kids in the Cul-de-Sac.

The most important and basic fact about the delectable treats is that they are candy. As usual, all of the kids in Peach Creek have a sweet tooth, and the jawbreakers are considered the most delectable type of candy. In addition, jawbreakers are only available for purchase at the Candy Store. This is not a problem for many of the kids, as they seemingly have pocket money as a source of income; however, it is assumed that with Ed and Eddy, and possibly Edd as well, their parents do not provide them with an allowance. To make matters worse for Eddy, his rival Kevin has a garage full of jawbreakers, courtesy of his father, who works at the factory where they are made.

Another thing about jawbreakers is possibly their sheer size. The Candy Store only sells jawbreakers in one size, which is about the size of a basketball. Because of their size they are ideal for the cast of characters considering their income. Jawbreakers are known to take a very long time to dissolve, both in the show and in real life.

In Ed, Edd n Eddy - The Mis-Edventures, there are many different kinds of jawbreakers. Jawbreakers can be found or bought; found jawbreakers are hidden throughout the levels, while bought jawbreakers cost $1.00. Each one also has a humorous description along with it; for example, the Japanese jawbreakers "taste like sushi," the Taco Crayon jawbreakers "taste better with hot sauce," and "The Great Nano would approve" if you ate a Sea Cucumber jawbreaker. These are all flavors based around jokes from the show. They are the key to getting 100% of the game finished.

Jimmy and Sarah find a jawbreaker.

Jawbreakers are popular with everyone.

Display of jawbreakers in the candy store.

I'd say you've had enough…

The Eds outside the Candy Store with Jawbreakers.

The Kanker Ketchup jawbreaker in the GBA version of Ed, Edd n Eddy: The Mis-Edventures 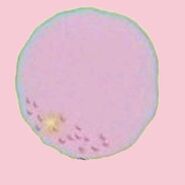 A jawbreaker up close

A known benefit of working at the jawbreaker factory is being allowed to take jawbreakers from the factory for personal consumption. This is first brought up by Rolf in "A Boy and His Ed" when he tells the Eds that Kevin's father has recently gotten a job there, and as such, Kevin now has a garage filled with jawbreakers. This is considered a giant perk to the kids of the Cul-de-Sac, as it not only helps Kevin keep his place as the most popular kid in the neighborhood, but also allows him to both give away jawbreakers at will (as seen in "A Boy and His Ed" and mentioned in "Dim Lit Ed") but also to make some money selling them (as seen in "Stuck in Ed").

In addition, Peach Creek Jr. High goes on yearly field trips to the Jawbreaker Factory, as seen in "Run Ed Run." A benefit of going on a factory tour is being allowed to take as many jawbreakers as you can eat and/or carry with you. The Jawbreaker Factory has a neon sign (depicting a tongue licking a jawbreaker) and a security booth in front of the parking lot. The factory is located in the countryside and the surrounding area appears to be clean. It is not to be confused with the Factory located behind the Cul-de-Sac, or the Lemon Brook Gag Factory located in Lemon Brook.

The road to the Jawbreaker factory.

Overhead shot of the Jawbreaker factory.