The DVD was first announced in January 2005 with a commercial as the very first DVD compilation in Ed, Edd n Eddy. This made many fans excited. Edifying Ed-ventures consists of six episodes from Seasons 1 and 2, runs for 83 minutes and has some extra features.

The appearance of the front cover is a greenish color with the Eds gazing hungrily into a jawbreaker with their reflection.

The menus are designed to match the artwork style of the TV series, utilizing very similar backgrounds and lettering. The main menu offers the standard options found on most DVDs - watch the episodes, change the language (options are French, Spanish, and English), watch the 'Fun Extras', or watch some trailers of other Cartoon Network series.

Four extra features are included on the DVD: 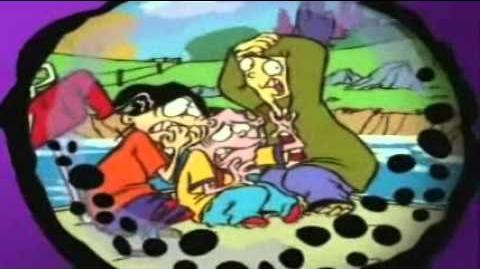