Ed, Edd n Eddy: Scam of The Century is a video game made for the Nintendo DS video game console. The plot revolves around Eddy losing his "Who to Scam and When" book and discovers Kevin has stolen it. It is now up to the Eds to rescue Eddy's book. The game allows you to use all three of the Eds' skills to retrieve the book. Kevin has however recruited the kids of the cul-de-sac to help him turn Eddy's scams against the Eds. The Eds all have their own skills such as Eddy belching to defeat enemies and Edd can throw books at enemies. There are also mini games such as "Whack-a-Zit", "Yeshmiyek's Bounty of Meat" and "Here's Pie in Yer Eye." Chunky Puffs serve as a health item. Jonny 2x4 reprises his role as Captain Melonhead in this game.

When you are able to buy a mini-game it will be in color, not in a sepia tone. Once you buy the mini-game you own it, so you can play it as much as you would like to.

In this game Ed needs your help to clear away the zits that are growing on his back. While you're doing this he is staring at you with a silly look on his face. When the zits begin to grow you will want to pop them as quick as possible. The zits have four stages of growth, once they reach the fourth stage you do not want to pop them because you will hurt Ed and get a game over. If you let three zits get to the final stage it will be a game over. This game is testing your speed, so go as fast as you possibly can. Use your stylus to pop each zit. While you go for one zit keep your eye out for another one that might appear. In the beginning the zits will start off slowly and as you advance the zits will pop up faster and faster. There is a timer so you will only be able to play for a certain amount of time so pop as many zits as you can and as fast as you can. It may be easier if you wait until the zits are at the third stage of growth and pop them at that time. This will be slower and you will not get as much points, but you might be able to last all the time that is given to you.

This game makes you think. You will be given a board filled with three different types of meat to start and you will have to arrange them in the correct order to get points. The order can go up and down or right to left. Just have at least three of the same type of meat in a row. Use the stylus to move one piece of meat up, down, to the right, or to the left. This game is also timed, you only have a minute to get as much points as you can. The time will reset every ten sets you get. But once you get ten sets the time will go down to the next 15 seconds. So it goes from 60 to 45 to 30 and so on. Once you get below 5 seconds it will reset every set that you make. Not only do you have to think about your moves, you will have to think quickly and react quickly. There are four different types of meat, chicken, ham, hot dogs, and sausage. Be careful of the broccoli because you will not be able to move it, but it will be able to be taken out when it is next to a set. The time that the sausage comes in is when you reach 20,000 points. Broccoli will come in after you score 30,000 points.The points in this game are as follows, 100 points for each set plus a combo bonus (# of combo x 100). So if you get a 3 set combo you will get 600 points. Every piece of broccoli that is taken out you will get 100 points.

In this game you are playing as Eddy (but he's offscreen) and you are throwing pies at Rolf, Sarah, and Kevin. Use your stylus to throw the pies up and at the kids. This game gives you another chance to have your revenge on them for taking Eddy's “Book o' Scams.” If you throw the pies quick enough and continuously hit the kids you will get a combo bonus. This game is timed so you have one minute to throw as many pies as you possibly can. It works better if throw each pie in rapid succession. Every time you hit one of the neighborhood kids you will get 100 points plus a combo (# of combo x 100). So if you get a 3 hit combo you will get 600 points. In order to score higher it will be better to get combos.

Hint: Throw the pies from right to left at a steady enough pace that when the fourth pie is thrown the first pie is ready.

The kids all reappear (except for Nazz) in the final level (which appears as a picture of Captain Melonhead) as the somewhat "bosses" of the game.

To beat the first part of this boss, you have to go forward until you reach the end of the screen while dodging enemies, and bars of soap that Sarah and Jimmy will launch. In the second screen, Sarah will throw broccoli at you, while Jimmy launches soap, and you can't proceed until you make them leave the screen. you have to hit Jimmy with a nut (a defeated enemy will also work) and they'll retreat. You have to win the final fight with them to go to the next boss (NOTE: In the final part of the section, Jimmy will have to be hit 2 or 3 times).

In the first section of this fight, you will have to dodge all the animals on the first screen. On the second screen, you have to once again dodge animals. Only this time, there will be Rolf's cow, Beatrice, you will have to dodge at the end. Rolf will also call down chickens you will have to either dodge or defeat. He (for whatever reason) will also call down marshmallows to refill your health. Keep dodging until Beatrice tires out. You'll know when it's tired when it fades to a cutscene (the cow doesn't have a tired animation; but will slowly walk) (NOTE: This fight can be made easy with the use of Edd's Special attack, just be sure to grab the marshmallows to refill health in case of damage).

There is only one section to this fight, but it's really quite easy. You have to throw cans at Kevin until he falls off his bike. He will throw water balloons at you, and occasionally jacks. If you get hit by either of these you take damage. You will also have to dodge falling stop signs, and fire hydrants in the path. It takes 10 hits to defeat Kevin, but you need to get very close to him in order to land a hit on him.

The final boss is actually rather easy. You have to dodge when he dashes forward, and try to avoid him when he jumps. Perhaps the most difficult part is when he starts throwing acorns. Jumping on him will result damage on your character, but don't fret, you can launch nuts at him and he'll eventually keel over. He takes about 10 hits to defeat (NOTE: you can tell when he is defeated when he drops Splinter and surrenders).

The game received mixed reviews. On IGN, it received 4.0/10 points.

There are seven possible Fourth Wall Breaks in this game as similar to the series:

(*= Cut-scene after completing the game.)

These are the cheat codes for this game as they'll appear when you successfully complete a stage with 5 stars. If you fail to get 5 stars, you won't get a cheat code. The cheat codes work during game-play, as in during a stage.

There are other cheat codes to use without requiring to get 5 stars on a stage. 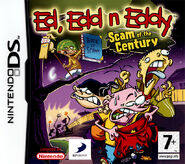 The menu screen of the game.

A screen from the game.

A screen from the game.

Scam of the Century gameplay.

A level with Ed.

A level with Edd.

A level with Kevin.

A combination of two possible screens.

The GIFs are very big especially for Edd's one, so it would be useful to download them for best views. They were all made with a DS Emulator.

They all have fourth wall breaks by noticing you, as well as some others. 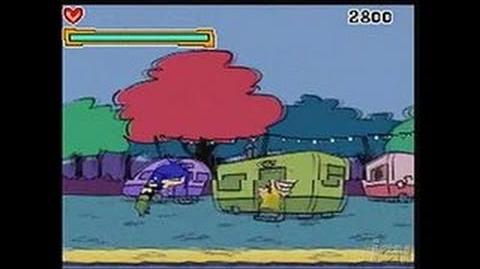