The show revolves around three pre-adolescent boys known as the Eds (whose names are Ed, Edd, and Eddy), who hang around their fictional suburban neighborhood of Peach Creek, coming up with scams to con their peers for cash, so they can buy themselves a handful of their favorite treat, jawbreakers. Their plans normally fail though, leaving them in predicaments and situations that always go haywire. The characters almost never leave the neighborhood and adults are never seen, with the exception of Eddy's Brother in Ed, Edd n Eddy's Big Picture Show.

The series was first aired January 4, 1999 on Cartoon Network after being delayed from December 1998. Originally, there were to only be four seasons; Cartoon Network, however, had ordered two more seasons of Ed, Edd n Eddy, bringing the series' length to six seasons. The sixth season, however, was cut short in order to produce a 90-minute TV movie, Ed, Edd n Eddy's Big Picture Show. There were also three holiday specials for Halloween, Christmas, Valentine's Day, and a special extraterrestrial oriented episode for Cartoon Network's mini-series "Cartoon Network Invaded": "The Eds are Coming."

On November 8, 2009, Ed, Edd n Eddy's Big Picture Show premiered in the United States, officially ending the long-running series. (However, the finale aired in several countries prior to the United States, the earliest being Scandinavia on May 31, 2009, which still brings the original run to roughly ten years).

In addition to airing on Cartoon Network in various countries, it also aired on other channels such as the sister network Boomerang, the Canadian channel Teletoon, and the Latin-American sister network Tooncast. The series has been added to HBO Max since January 1, 2021.

Danny Antonucci, the show's creator, made the following comment on the show's stylistic inspiration in an interview:

Another aspect of the show's style is the "boiling line" effect, in which characters and moving objects in the foreground of a frame appear to shimmer at their outlines. This is created by tracing the same drawing three times, creating a shimmering effect that Antonucci says brings the characters to life. Antonucci also stated that he opted for the unique boiling line effect in order for Ed, Edd n Eddy to stand out from the other shows on the network.

The Eds in Foster's Home for Imaginary Friends.

The Eds' cameo in "The Grim Adventures of the Kids Next Door."

Eddy seen again popping out of the defeated Delightful Reaper in "The Grim Adventures of the Kids Next Door."

The Eds' on a tabloid in "That Darn Platypus."

Plank plushie in Two and a Half Men.

Edd in the lunchroom during "Once Upon a Toon."

Edd seen a second time in the MAD short.

Edd in The Kid.

Ed and Eddy in Zombie Tramp.

A second page of the duo.

Another shot of Eddy in the comic.

Ed and Eddy in Shattered.

The Eds in the OK K.O.! episode "Monster Party" 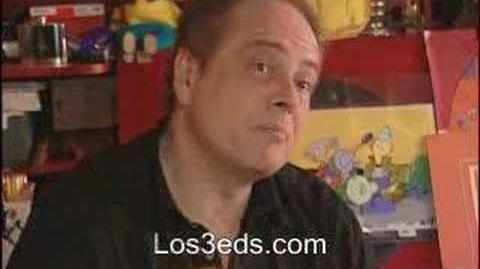 Behind the ink- of Ed, Edd, and Eddy 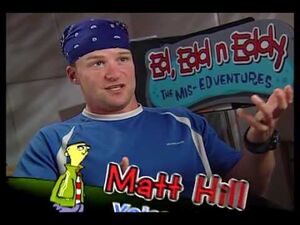 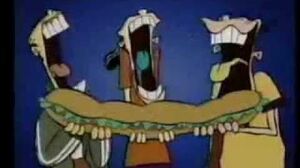 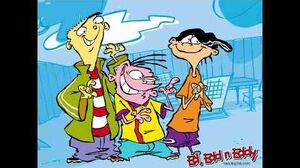