"A Fistful of Ed"

A Fistful of Dollars

This episode was the second two-part episode planned as the series finale until two new episodes, "May I have this Ed?" and "Look Before You Ed", aired on Cartoon Network.

The episode starts off with The Happy Cluckers Club at Peach Creek Jr. High, who are tending to their eggs, while Edd is checking each and every one of them for inspection. Suddenly, they are interrupted when the Kankers barge in, hungry and wishing to fry the eggs up and eat them. Frightened of the three evil Kanker Sisters, the children panic and scream. They quickly find places to hide in the classroom. As Edd tries to protect the eggs, even trying to get Lee interested in egg hatching by showing her a heavy book about bird hatchery, he accidentally drops it on her foot, causing it great pain and swelling. The Happy Clucker's Club witnesses this and is now greatly frightened of Edd.

Soon rumors start to spread throughout the school, then Rolf comes up to Edd to ask him if he could borrow a pencil from him. As Edd reaches in his locker to give him one, he suddenly, and seemingly for no apparent reason, hits Rolf on the head with his foot two times (fracturing his skull), and then pins him to a locker with pencils. Edd is shaking, and all of the kids are now screaming and running from the scene. Eddy, who just saw this, suddenly sees a way to profit from his new found status.

At lunch time, everyone avoids Edd, though he wishes them no harm and doesn't understand why everyone, including Ed, is afraid of him. On the other hand, Eddy is now exploiting Edd's unfortunate status as a tough guy to have the kids do things for him, while Edd wants no part of it. Suddenly, Marie and Jonny start arguing over the last piece of pie, and Edd tries to convince them to compromise. But again, he somehow punches Jonny, sending him into Marie and through the wall before hitting a tree and falling to the ground. The rest are now terrified, but Edd tries to reason with them, and assure them that it was all an accident. Edd approaches Sarah, begging her to believe him, but Ed steps in and defends his sister. He tearfully says to Edd that they can no longer be friends. "My mom says I can't be chums with a fighting fisticuffs like you!" This breaks both of their hearts, and both he and Edd begin to sob. Edd decides to end the situation and grabs the chair that Ed was using to protect Sarah. Edd then seemingly gives Ed an extremely violent thrashing as Eddy and the kids look on in horror. Soon Ed digs a hole in the wall and escapes, while the other kids quickly leave through the door. Eddy praises Edd, but does say that maybe he was a little rough on Ed. Edd glares at him, and Eddy leaves so he can have Nazz give him a foot massage. Edd is left all alone and he questions himself if he really is a bully.

A heartbroken Edd is all alone in Botany Class, tearfully tending to his plants, when he is alerted by a small crash. Who he first thought was Ed, he finds that Jimmy is in the room, and Jimmy starts to run away as fast as he can. Edd begins to sob again, reflecting on the fact that no one will ever believe him. Then the plant that Edd was tending opens up, and Jimmy identifies it as a pollinated cross between a rose and a Baby Blue Gym Sock, and claims that only the gentlest hands could do that, which made Jimmy believe Edd. He then decides to hear Edd's side of the story. Edd tells Jimmy of what really happened to those he hurt:

Edd says that he is a pacifist and would never EVER hurt anyone, but he is so ashamed that no one will believe him. After the series of unfortunate events is explained, Jimmy and Edd come up with a plan to remove the bully image from Edd, by having a mock fight in which Jimmy beats up Edd. They appoint the fight at 3 pm at The Pit. They appoint it in front of Kevin in order to make sure the news of them fighting spreads across the school.

A short scene then shows that a battered Ed has fallen into a depression and now has a new friend, which is an egg with Edd's face drawn on it and wearing a miniature version of Edd's hat named Double G (Egg), but Ed finds that his new friend is no substitute. He, along with Eddy, who is sitting on a throne carried by Rolf and Jonny, go to The Pit. Edd and Jimmy begin the fight, which is just more or less girly slapping. The rest of the kids see it as a brutal fight and encourage Jimmy. Eddy is all the while insulting, taunting, and pelting Jimmy with endless hot dogs, breaking his concentration. He even taunts Jimmy saying he's going to pop but that he already did like the time the Eds turned Jimmy into a Sumo wrestler. An angry Jimmy turns his attention to Eddy and tries to climb up to the dumpster on which Eddy is sitting upon to beat him up. Edd tries to break them up and starts to pull Jimmy by his pants in order to pry him off, but only manages to launch Jimmy in to Rolf. Eddy does not stop with the taunting, and soon Jimmy is suddenly so enraged that his face turns red and steam begins to erupt from his head. He charges at Edd, screaming, and starts viciously beating up Edd, to the point where he even bites of a part of his tongue off and does not remember what just happened after he finally settles down. The rest of the kids begin to celebrate, hailing Jimmy as a hero (not knowing that Jimmy is actually shocked and horrified at seeing what he has done out of anger) and Kevin decides to steal the black jacket Eddy has been wearing. Eddy is angry, while Edd is simply happy that this bully reputation is over, and he and Ed can renew their friendship. Just when things are happy, the Kankers show up and kiss Edd. Then, in a rare moment of bravery, a very angry Eddy yells at the Kankers to leave Edd alone; "BEAT IT!". The Kankers, somewhat scared, awkwardly leave. Edd starts to go on about how he is proud of Eddy until Eddy shoves a hot dog in his mouth to shut him up. Ed then expects Eddy to give one to him. Eddy then gives Edd's hot dog to him. But Edd complains about that was his hot dog. Annoyed, Eddy gives a new one for Edd and then one for himself. He then asks if they are all finally happy and the episode ends, with a relatively happy ending. 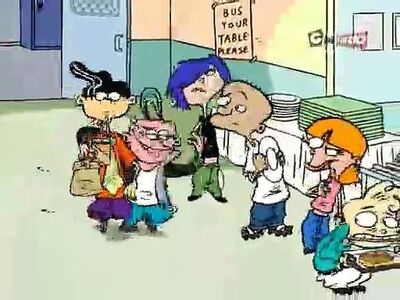 Retrieved from "https://ed.fandom.com/wiki/A_Fistful_of_Ed?oldid=239181"
Community content is available under CC-BY-SA unless otherwise noted.