Before working as an animator, "Big" Jim held many jobs. These included retail jobs, making signs and awnings, and even painting parking meters once. He became interested in animation as a kid, as he was a fan of the MGM and Warner Brothers cartoon shorts. He later became interested in comic books, and these made him want to be an artist; in fact, he at first wanted to draw comic books.

He originally attended college in order to study genetics. While there, he discovered that he wasn't interested in the science, and heard that a friend of his from high school was in film school, working on animation. When he heard what it was like, Mr. Miller decided to drop out of his courses and take a class on animation at a separate institute. He was accepted into and completed the course only to find that there was no work available when he graduated. For a few months, he looked for work, and eventually found that A.K.A. Cartoon needed artists. Miller took a test to get in; on the day he was laid off from the job he was working at the time, AKA called him up and hired him.

He worked on Ed, Edd n Eddy for its full ten year run, and since then has been working on My Little Pony: Friendship is Magic. 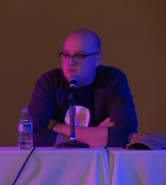 "Big" Jim Miller being interviewed for his works in My Little Pony.